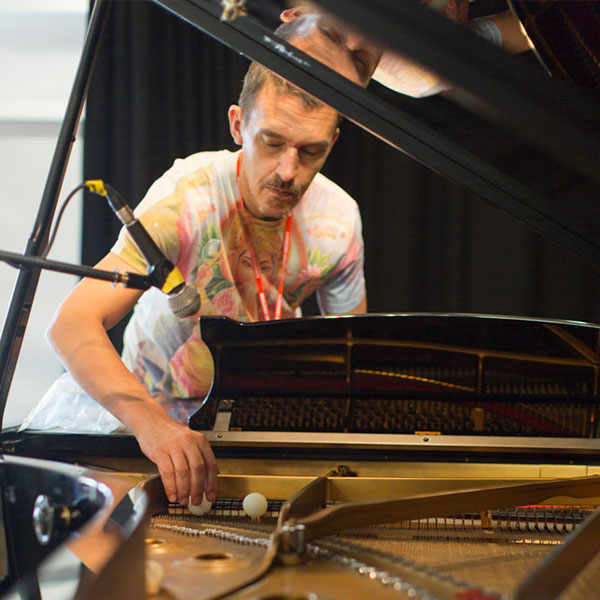 Rolf Hind’s career has blossomed in a multitude of directions – establishing him now as a major force as soloist, composer, recording artist, chamber musician, pedagogue, collaborator and concert planner. His work as a recitalist has taken him to many of the leading new music festivals in Europe – by way of Carnegie Hall, Sydney Opera House and tours of Korea, Taiwan and Cuba. Rolf has worked with many leading conductors, including Ashkenazy, Knussen, Rattle, David Robertson and Andrew Davis and appeared at the BBC Proms seven times. Orchestras he has worked with include the Chamber Orchestra of Europe, Munich Philharmonic, Danish Radio Symphony Orchestra, Malmo Symphony, and Baltimore Symphony Orchestra, and many appearances with the London Sinfonietta, the LPO, RPO, the BBC Symphony and all the other BBC orchestras.The roster of composers who have worked with Rolf or written for him reads like a who’s who, and includes Tan Dun, John Adams, Helmut Lachenmann, Unsuk Chin,Elliott Carter,George Benjamin,James McMillan amongst many others.Peter Maxwell Davies is writing a new solo piano work for Rolf, to be premiered at the Wigmore Hall in April 2016. Rolf ’s growing list of compositions include a piano concer to, Maya-Sesha, nominated for a British Composer’s Award and a concerto for accordion and orchestra with soloist James Crabb and the BBC Symphony Orchestra, premiered at London’s Barbican Centre. Much of his music is inspired by a fascination with the culture, mythology, philosophy and music of India, which he has travelled to often. At the same time it draws on the technical adventurousness of certain performers, including himself. Cheltenham Festival commissioned Rolf to write a new work for gamelan and ensemble, which was premiered in July 2015. An interest in new dance has resulted in various collaborations for example with leading Portuguese choreographer Rui Horta on a large-scale tour of a new work,“Danza Preparata”,featuring the Sonatas and Interludes of John Cage for prepared piano, with dancer. Premiered in Porto in April 2012, the work toured all over Europe, including Rome,Vilnius, Strasbourg, Dresden, Salzburg and London’s Southbank Centre. Rolf curated and performed in a new piano festival at St John’s Smith Square in May 2014, “Occupy the Pianos”, which will be repeated and expanded in September 2015. His first opera, a ‘Mindfulness opera’ for voices, instruments and audience, commissioned by Mahogany Opera Group, directed by Freddie Wake Walker, entitled “Lost in Thought” will be premiered at London’s Barbican Centre in September 2015.